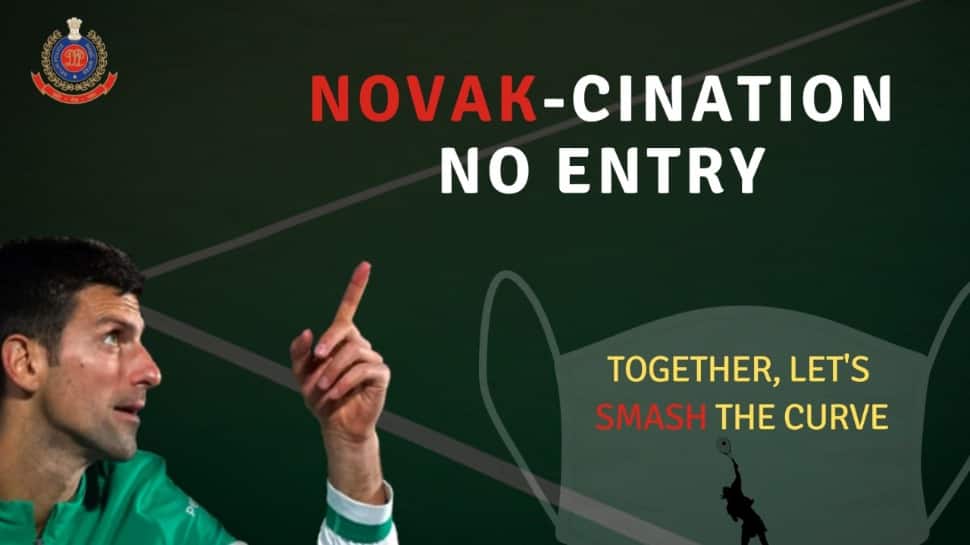 New Delhi: Amid the ongoing COVID-19 vaccine controversy around Novak Djokovic, Delhi Police has taken a jibe at the Serbian for not taking the jab.

In a tweet recently, the city police had posted a picture of Djokovic and said, “Safety is no JOKE-ovic”.

“NOVAK-CINATION, NO ENTRY,” a text on the photo read as Djokovic was involved in a visa dispute over his COVID-19 vaccine status.

Meanwhile, the world’s top-ranked tennis player was required to surrender to officials in Melbourne for an interview on Saturday. Border Force officers were due to accompany the 34-year-old player to his lawyer`s offices for an online hearing in the Federal Court ahead of the appeal scheduled for Sunday.

The government undertook not to deport Djokovic until his appeal has been heard, although the world number one was ordered to return to pre-deportation detention.

This is noteworthy that Djokovic wants to defend his Australian Open title, and the tournament begins on Monday.

Earlier, Australian Immigration Minister had used discretionary powers to revoke the visa. Alex Hawke said the unvaccinated sports star should be removed from the country on “health and good order grounds” and in the “public interest”.

Djokovic’s medical exemption from vaccine requirements to play the Open has prompted enormous anger in Australia, which has undergone some of the world’s toughest COVID-19 lockdowns and where more than 90% of adults are vaccinated, but hospitalisation rates continue to hit record highs.

With global scientists and policymakers focused on vaccinating as many people as possible to end the pandemic, the refusal of Djokovic to get the jab has fueled the anti-vaxx movement, especially in his native Serbia and surrounding countries.